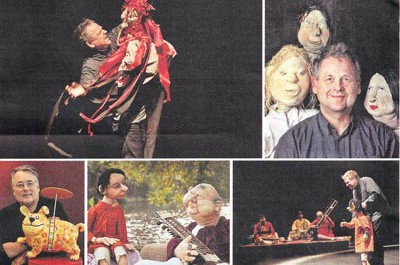 “It’s about every young person who steps out of his childhood to become an adult,” says Matthias Kuchta who along with Stephan v. Lowis was in town recently to present Dadi Pudumjee’s play, Sanjay and his Master as a part of Goethe Zentrum’s Indo-German project.

The beginnings of the puppet show can be traced back to the time when Stephan was visiting India as a part of the Hamburg Cultural Ministry and met Dadi Pudumjee and decided to collaborate with the art of puppetry.

Matthias explains that while human actors have their personality to lend to the character, a puppet’s non-human persona is all that there is to express and reflect the big idea. “Every one can relate to a puppet. It opens up people’s minds. By animating them, you’re breathing life and you’re making them real,” he adds. He feels that puppeteering helps in communicating well with the audience and brings it alive. “Using movements that emphasise emotions and how you animate will decide the message you convery. Often human gesticulations are exaggerated in puppeteering. Puppets have limitations, unlike human actors, you don’t have the gift of facial expressions, so it must be compensated by big gestures,” he says.
Staying in close contact with the object, opens your mind. “It’s like taking it to a fetish level, it’s intimate,” says Matthias. Music plays a big part in this productions, two sitar players and a tabla player, lend background music but also are meshed up into the narrative beautifully. Adapted from a Buddhist fairytale, the play is about Sanjay, who leaves his home to dream big about becoming a sitar player but he isn’t very good with the instrument. He learns under the mentorship of Rajad, a well-known court musician and falls in love with his daughter Nandita. The narrative has many layers to it and it draws a parallel in the play. It’s a battle of the creator and the creation and in the end it sends home a message, that we all have our own roles to play. “Everything ends well of course…” beams Matthias.

The puppets are not traditional, they are big and life-like. Ask Matthias about the on-stage difficulties, Matthias laughs and says there’s room for plenty. “There is a good chance the necks of the puppets might break and in fact they have, so right on stage you have got to improvise and bring in a fresh twist to keep the audience going,” he says. Matthias also says that improvisation is the best part in his work. “I always hope for the unforeseen, something comes loose. It helps to step out of a story every once in a while.”